Several concentrating still condenser tubes exhibiting pitting were received to determine the cause of pitting. Results indicate the condenser tubes pitted initially from the inner diameter (ID) surface due to microbiological corrosion (MIC). MIC pitting initiated preferentially at the tube seam weld. Additional ID surface pits and significant pit enlargement of MIC pits due to chloride pitting were also observed. The chlorine is likely remains from the hydrochloric cleaning process. The acid residue becomes trapped in the complex network of inter-dendritic penetrations resulting from preferential MIC attack of ferritic dendrites in the seam weld. Additional pitting occurred at what appears to be witness marks from contact with a cleaning tool.

Chloride pitting initiated on the condenser tubes outer diameter (OD) surfaces was also observed, but to a lesser severity. It is theorized the pitting initiated from the ID results in leakage and introduction of chlorides to the shell side of the tubes.

Chemical analysis of a condenser tube sample identified the alloy as Type 304L stainless steel. Microhardness testing revealed the material is at the high end of hardness for this grade in the proper annealed condition. No sensitization (carbide precipitation at the grain boundaries) was observed in the microstructure. The composition, microstructure and hardness are in compliance with ASTM A249-03 (equivalent to ASME SA249) for Grade TP304L welded stainless steel condenser tubing.

A biocide water treatment is recommended. Mechanical or water jet cleaning and elimination of the hydrochloric acid cleaning are recommended.

Fifteen sectioned pieces of concentrating still condenser tubes were received to determine the cause of significant pitting. The tubes are ¾-in. x 0.049-in. wall thickness and were reportedly manufactured from 304L stainless steel. From 2004 to present the tubes have been subjected to a hydrochloric acid (HCL) cleaning with a post water rinse for neutralization. In October of 2006, 500 new tubes were installed via field re-tubing process. Mud samples taken from the new tubes recorded a pH level of 2.5 to 3.0. Cooling water comes from the plant cooling pond/ditch. At present, there is no biocide added to the cooling water, which feeds the process plant.

Figure 1 is a photo of several of the tube samples exhibiting pitting in the as-received condition. Two tubes, identified as 1A and 2A, exhibiting typical pitting conditions were selected and sectioned longitudinally to expose the ID surfaces for examination.

Figure 2 is a close-up photo typifying shallow OD pits in the early stages of corrosion on the 1A tube sample. Other than the through-wall pits (which are theorized to be ID initiated based on subsequent analyses), the OD pits tended to be quite shallow. One of the typical pit locations was subjected to energy dispersive x-ray spectrographic (EDS) micro-analysis (ASTM E1508-98) accompanied with high magnification scanning electron microscopy (SEM) to investigate the pit deposits.

Figures 3 and 4 are increased magnification SEM images of the OD pit using back scatter electron (BSE) imaging. The BSE image is more sensitive to compositional and topographical variations. Low atomic number (light) elements are darker and high atomic number (heavy) elements are lighter in the image. The pit is surrounded by a dark crystalline deposit.

Figure 5 is the resulting EDS spectrum of the OD pit deposit revealing a high amount of chlorine, iron, and oxygen, with traces of potassium and calcium. The deposit is typical of chloride pitting.

Figures 6 and 7 are close-up photos of typical ID pits in early and late stages of corrosion in the 2A tube sample. Most of the major ID pits were preferentially associated with the seam weld.

Figures 8, 9, and 10 are increasingly closer views of the ID surface of the 2A tube. Spiral witness marks are believed to be caused by contact with a cleaning tool. The closer views show pitting preferentially aligned along the witness marks.

A bulk EDS analysis was then performed on the ID surface deposits of the 1A tube sample in a region of pitting. Figure 11 is the resulting EDS spectrum of the ID deposits. Other than oxide products of the stainless steel tube metal (oxygen, iron, chromium, and nickel), a significant amount of chlorine, with traces of potassium and calcium, is detected.

Figure 12 is a low magnification optical photomicrograph of the condenser tube 2A cross-section. Pitting is observed along both the ID and OD surfaces. The deepest pits are noted along the ID surface. Figure 13 is an increased magnification optical photomicrograph of a deep ID pit. Notice the pit attack front is smooth and slightly undercut with no inter-dendritic fingers or branching. This is the typical morphology of chloride pitting in stainless steel.

Figure 14 presents a section of condenser tube revealing pitting in the OD and ID surfaces. Several shallow ID pits and one major OD pit is observed. The shallow ID pits are interdendritic. A higher magnification view of one the shallower ID pits is presented in Figure 15. Notice the interdendritic penetrations and branching at the pit attack front. This is a characteristic of MIC induced pitting, which is preferential to the fine ferrite dendrites in stainless steel welds.

Figure 16 is an increased magnification photomicrograph of one of the OD pits displaying no interdendritic fingers and branching at the pit attack front (smooth attack front). No sensitization (carbide precipitation at the grain boundaries) was observed in the seam weld microstructure.

Chemical analysis was performed on the 1A condenser tube material using an optical emission spectrometer in accordance with ASTM E1086-94 (00). Results indicate the tube is manufactured from Type 304L stainless steel. Results of the chemical composition are tabulated below.

Microhardness testing was performed on condenser tube 2A in accordance with ASTM E384-99e1. Results were converted from Knoop 300-gram load to Rockwell C (HRC) using ASTM E140-02 (conversion table used is for non-austenitic steels and is considered to be an approximation only). Four separate readings were taken at random locations on the cross-section for an average hardness value of 91 Rockwell B (HRBW). This value is barely above the 90 HRB specified for properly solution annealed TP304L recommended by ASTM A249. The approximation obtained by the conversion, and lack of carbide precipitation along grain boundaries in the microstructure, indicates the material is in the proper solution annealed condition.

The most severe pitting initiated from the ID surface, due to microbiological corrosion (MIC) and subsequently enlarged due to chloride pitting. MIC induced pitting was mainly preferential to the condenser tube welded seam. Additional pitting was observed along a spiral witness mark on the tube ID. The witness mark is theorized to be from a cleaning tool. Chloride pitting was also noted on the tube OD, which is believed to have occurred after ID initiated pitting resulted in tube leaks and subsequent chloride contamination on the shell side.

The tube composition, microstructure and hardness indicated the condenser tubes meet the requirements for ASTM A249, Grade TP304L welded stainless steel condenser tubing. No sensitization (carbide precipitation at the grain boundaries) was observed in the microstructure. 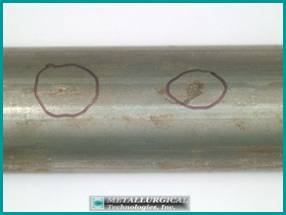 Figure 2: A close-up photo of typical shallow OD pits (encircled) in the early and late stages of corrosion on the 1A tube sample. 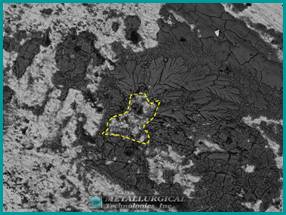 Figure 4: Increased magnification SEM/BSE image of the OD pit. EDS analysis of the crystalline deposit in the center of the pit (encircled) is displayed in Figure 5. 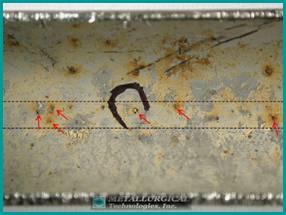 Figure 6: Close-up photo of a typical ID pit in an early stage of corrosion in the 2A tube sample. Most of the ID pit (arrows) is aligned along the seam weld (between dashed lines)

Figure 7: Close-up photo of a typical ID pit in a late stage of corrosion in the 2A tube sample. The pit is along the seam weld (between dashed lines). 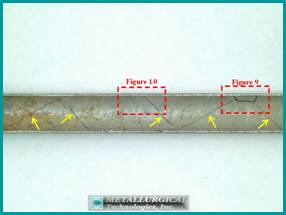 Figure 8: A photo of an ID section of the 2A tube. Notice the spiral witness marks (yellow arrows). The boxed locations are shown in closer views in Figures 9 and 10. 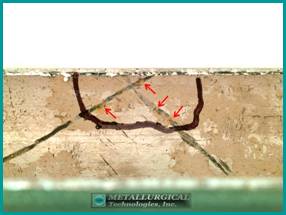 Figure 9: Close-up photo of the boxed-in area in the previous figure reveals pitting along the witness marks (arrows). 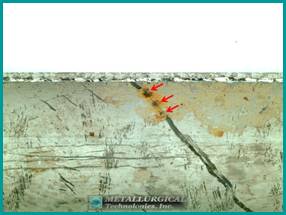 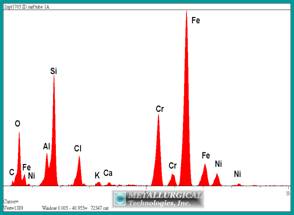 Figure 12: Low magnification optical photomicrograph of the longitudinal cross-section from the 2A tube. Pitting is observed on both the ID and OD surfaces (arrows). The boxed areas are displayed at increased magnification in subsequent figures. (Mag. 15X, Acetic glyceregia e 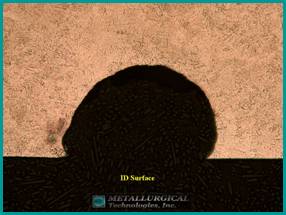 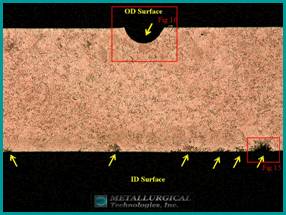 Figure 15: High magnification optical photomicrograph of an ID pit in the early stages. Note the interdendritic penetration network. MIC preferentially attacks the fine ferrite dendrites in the seam weld. This morphology was typical of all the shallow ID pits noted along the seam weld. No sensitization (carbide precipitation at the grain boundaries) was observed in the microstructure. (Mag. 200X, Acetic glyceregia etch) 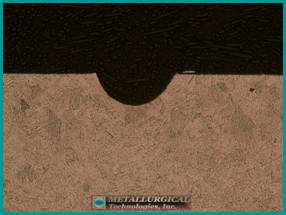 Figure 16: Increased magnification optical photomicrograph of the OD pit noted in Figure 14 displays no interdendritic fingers and branching at the pit attack front. No sensitization (carbide precipitation at the grain boundaries) was observed in the microstructure. (Mag. 100X, Acetic glyceregia etch)