Metallurgical Technologies, Inc. routinely performs failure analysis services for the top NASCAR racing teams. Race teams count on MTi’s failure analysis to help determine causes of failure so the problem can be corrected before the next race. We also test new components before they are installed to ensure that the best possible component available is used.

All race teams strive for one thing: a consistent, unstoppable racecar that will finish up front. MTi’s expert metallurgists are a key component in achieving this goal and a race team’s winning season.

A titanium exhaust valve that exhibited unusual pitting in the molybdenum-coated stem was analyzed to characterize the condition of the valve. An arrow points to a pitted area on the stem. The transition edge of the molybdenum coating was approximately 1.5-in. from the head end of the valve. Most valves previously examined exhibited transitions approximately 1.75-in. or greater from the head end of the valve. A companion exhaust valve from the same engine failed; however, the failed component was destroyed and was not available for failure analysis. 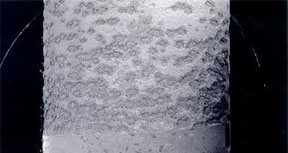 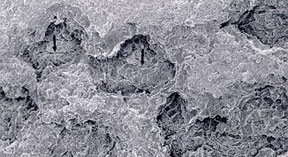 Several pits are presented at a higher magnification in this SEM image. Arrows point to transverse cracks noted in the bottom of some of the pits. (SEM Photo, Mag: 100X)
A longitudinal cross-section was taken through some of the pits and prepared for metallographic examination. One of the pits in the molybdenum coating cross-section is presented in this photomicrograph using an optical microscope. The pit is a spall in the molybdenum coating. A layer of corrosion product is found in the spall. Corrosion has penetrated into the titanium stem to a depth of approximately 0.001-in. Thermal fatigue cracks are noted under the corrosion layer in the pit. A thin white alpha case is noted under the corrosion layer and around the cracks. Alpha case is the formation of a layer of oxygen-rich brittle alpha phase. It is a detrimental condition in titanium, resulting from high temperatures in an oxygen-rich atmosphere. (Mag: 250X) 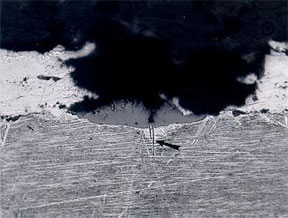 This image displays the transition edge of the molybdenum coating. The coating has spalled and an oxidation corrosion layer has filled in the spall. A shallow crack is noted under the corrosion layer. (Mag: 400X)

Failure analysis reveals that pits in the valve stem are spalled areas of the molybdenum coating. Oxidation corrosion of the titanium base metal was found at the spall locations. A thin layer of alpha case was noted under the oxidation layer. Thermal fatigue cracks and alpha case formation were observed at many of the spalled and oxidized locations. These features indicate unusually high temperatures and increased oxidation potential in the environment. The molybdenum coating is farther towards the head end than found on previously examined exhaust valves. Differences in thermal expansion characteristics are more pronounced at the higher temperatures near the head of the valve and lead to thermal fatigue cracking.

Forensic examination of a failed component can prevent recurring failures, help with preventive detection, and suggest remedies. If you have a component failure that requires a failure analysis, please take a moment to fill in our information request form and we’ll gladly give you an estimate.