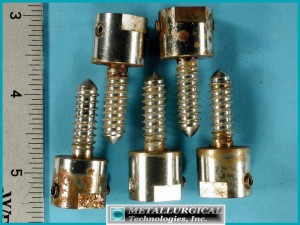 Metallurgical Technologies, Inc. (MTi) received five stainless steel bolts from a marine environment. The bolts exhibited corrosion predominantly on the head of the bolt around the set screw, underneath the head of the bolt, and in the threads. MTi was requested to determine the cause of the corrosion.

Results of the examination determined the bolts were manufactured from a free machining grade of stainless steel, not 316L stainless steel, which was specified. The free machining grade inherently contains a multitude of manganese sulfide inclusions. The inclusions led to localized galvanic cells between the base material and the inclusion. The parts were also partially sensitized (intergranular carbide precipitation), due to improper annealing. This resulted in corrosion attack along the grain boundaries.

EDS determined the corrosion product was iron (Fe), chromium (Cr), manganese (Mn), nickel (Ni) and copper (Cu), from the base material, with traces of carbon (C), oxygen (O), magnesium (Mg), silicon (Si), chlorine (Cl) and calcium (Ca) (Figure 3). Chlorine and moisture from the marine environment most likely contributed to corrosion of the bolts.

Spectrographic chemical analysis was performed on the material using an optical emission spectrometer in general accordance with ASTM E1086. Results indicate the component is not manufactured from UNS S31603 (316L stainless steel), as was specified, but more closely matches a free machining austenitic stainless steel, such as UNS S30330 (303Cu), UNS S30430 (302HQ), or UNS S30431 (302HQ-FM). Results of the chemical composition analysis are provided in Table 1.

1 Exceeds the maximum for 302HQ and 316L stainless steel.

2 Exceeds the maximum for all four material types.

3 Exceeds the maximum for all materials but 303Cu.

6 Does not meet the minimum specified for 316L.

Branching cracks were observed in the set screw hole of the bolt head cross-section (Figures 4 through 7). The bolt cross-sections were etched with Oxalic acid to determine if grain boundary carbides, typical of sensitization, were present. The precipitation of chromium carbide on the grain boundaries occurs in austenitic stainless steels when the stainless steel is exposed to temperatures of approximately 1250 to 1650°F, leaving the near-grain-boundary area depleted of chromium and; therefore, susceptible to preferential attack by a corroding medium. Figure 6 shows that the bolts had carbides present on some of the grain boundaries, indicating the material was exposed to improper temperatures and was improperly annealed.
Figures 8 through 12 show a crack in the flat, bottom portion of the bolt head, adjacent to the threads. Large, linear inclusions can be seen in the unetched cross-sections. These inclusions are manganese sulfides, a result of the higher manganese and sulfide contents. The use of free machining stainless steels, which contain elevated levels of sulfur that result in easier machining, creates galvanic cells between the base metal and the inclusions. Figures 11 and 12 show attack at the inclusions. From these inclusions, branching stress corrosion cracks progressed. The set screw holes and the crevices underneath the bolt heads allowed salts to concentrate in these areas and crevice corrosion to occur as well. 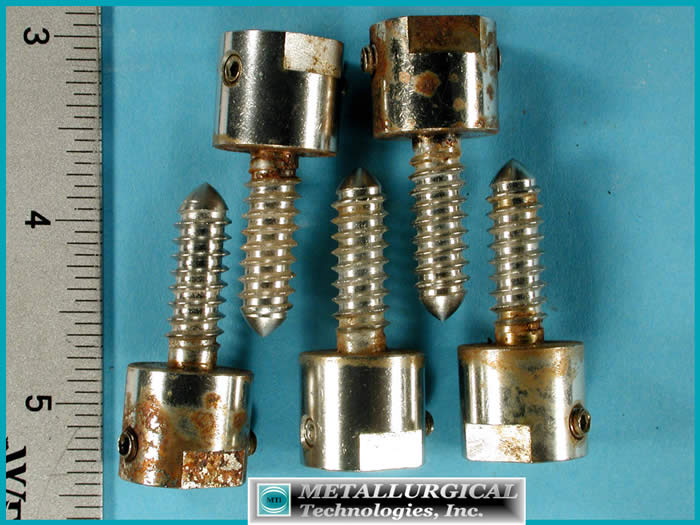 Figure 1: Overview of the bolts, as received, showing rust discoloration.

Figure 2: Closer view of the rust discoloration on an as-received bolt, typical of all the bolts received.

Figure 4: A longitudinal cross-section through the bolt head at the set screw showing branching cracks (arrows) in the threads. (Mag. 15X, Acetic Glyceregia) Figure 5: A closer view of the branching cracks seen in Figure 4. The multi-branched cracks are typical of stress corrosion cracking. (Mag. 50X, Oxalic) 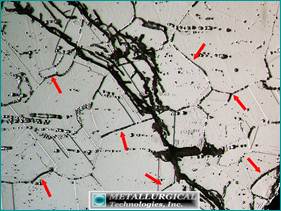 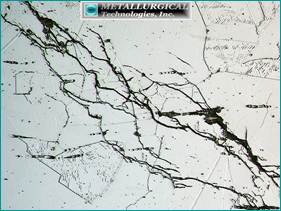 Figure 8: A low magnification view of a crack through the flat, bottom portion of the head of the bolt, adjacent to the threads. (Mag. 50X, Acetic Glyceregia) 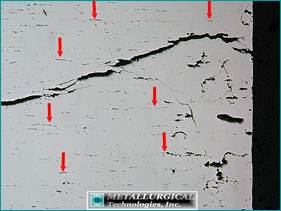 Figure 9: A higher magnification view of the crack in Figure 8, unetched. Note the number of linear inclusions (arrows) in the cross-section. Corrosion follows some of the long inclusions. (Mag. 100X) 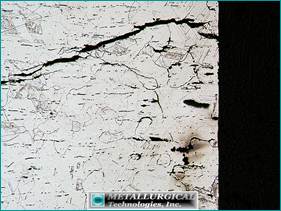 Figure 10: An etched view of Figure 9 showing the crack is both intergranular (along the grain boundaries) and transgranular (across the grains). 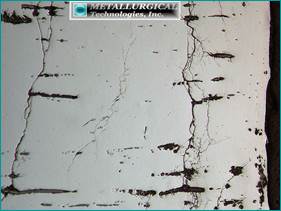 Figure 11: A closer view of the unetched cross-section showing attack at the inclusions, with cracks progressing from the inclusions. (Mag. 500X) 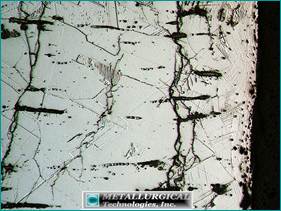 Figure 12: An etched view of the cross-section showing attack at the inclusions with branching cracks progressing from the inclusions.(Mag. 500X, Acetic Glyceregia)