A fractured weldment from a crane frame assembly was received for analysis to determine the cause of fracturing along the circumferential fillet weld. Results indicate the fracture occurred by cyclic fatigue crack growth that initiated at the root of the fillet weld due to incomplete penetration by the root pass and a lack of fusion to the pipe or flange at several locations around the weldment.

Microscopic and metallographic examination revealed fatigue crack initiation sites at and between the incomplete penetration and lack of fusion sites. The lack of penetration was noted around 60% of the circumferential fillet weld. Lack of fusion to the pipe and flange were noted around approximately 50% of the weld.

The flange and pipe were manufactured from weldable grades of high strength, low alloy structural steels. A compatible low alloy steel filler metal was used. Hardness testing across the weldment revealed no unusual softening or embrittlement.

A fractured weldment (flange and pipe) from a crane frame assembly was received to determine the reason for the pipe/flange separation. Figure 1 is a photograph of the components in the as-received condition. The assembly fractured around a circumferential fillet weld joining the pipe to the flange as shown in Figure 2.

The fracture surfaces were lightly cleaned using soapy water, rinsed with alcohol, and warm-air dried. The cleaned fractures were examined at low magnification (to 30X) using a stereomicroscope. Several significant areas exhibiting a lack of weld penetration to the root of the weldment and lack of fusion between the weld deposit and the pipe and between the weld and the flange were found.

Figure 4 is a view of the fracture on the pipe side with the regions of the lack of weld penetration and fusion mapped out. A close-up view detailing these features is presented in Figure 5.

A closer view of the fatigue zones and lack of fusion between the weld deposit and flange area is presented in Figure 8. The photograph reveals an area above the lack of fusion that exhibits fatigue fracture (along the ID) and shearing overload (along the OD). This area was subsequently cross-sectioned in a radial manner across the weld (as indicated in the figure) and metallographically examined.

A section of the flange side fracture surface exhibiting fatigue (Figure 6) was subjected to increased magnification examination using a scanning electron microscope (SEM) to investigate the initiation site and verify the propagation mechanism. Figure 9 is a low magnification SEM image of the fracture surface. A zone of high cycle fatigue with multiple initiation sites at the weld/flange interface is identified along the ID of the weldment. Above the high cycle fatigue region, is an area of lower cycle fatigue. A region of shearing overload is observed along the OD of the weld fracture surface.

Figure 10 is a higher magnification photomicrograph of the high cycle fatigue initiation region along the ID (root) of the weldment. Ratchet marks and porosity cavities are noted along the weld deposit/flange interface. Several of the fatigue initiation sites are associated with the voids in the weld deposit. Figure 11 is a higher magnification of a typical void cavity. Radial marks are visible emanating from the edge of the void.

A radial cross-section across the fracture at a typical region exhibiting a lack of penetration and fusion was obtained and prepared for metallographic examination in general accordance with ASTM standard E3-01 and etched (2% Nital) as recommended by ASTM standard E407-99.

The cross-section was taken across the pipe and flange fracture aligned at the same location, then reassembled. Figure 15 is a photograph of the mounted, polished and micro-etched pipe/flange weldment cross-section. Noted immediately, is the lack of complete penetration of the root pass weld deposit. A lack of fusion between the root pass and the beveled pipe end is also noted. A crack extends from the lack of fusion of the root pass to the face of the reinforcing fillet weld.

Figure 16 is a low magnification optical photomicrograph of the fracture cross-section. The lack of penetration and lack of fusion of the root pass are more readily resolved. Several locations are displayed at increased magnification in subsequent figures.

Figures 18 and 19 are increasing magnifications of the fatigue crack at the end of the lack of fusion flaw between the root pass and pipe. The crack has propagated into the reinforcement fillet weld deposit. The weld deposit exhibits a low carbon acicular microstructure. The heat affected zones (HAZ) of the pipe and flange exhibit tempered martensite and fine acicular pearlite. No unusual conditions are noted in the microstructures.

Figure 20 is an optical photomicrograph of a small lack of fusion region between the root pass weld deposit and flange. A short fatigue crack is noted at the tip of the lack of fusion zone.

The chemical compositions of the reinforcement fillet weld metal, pipe and flange base metals were determined using an optical emission spectrometer in general accordance with ASTM standard E415-99a. The analyses indicated low carbon, high strength low alloy structural steel components for the flange and pipe. The compositions indicate weldable grades. A compatible low alloy steel filler metal was used. A summary of the chemical analyses for each component is presented in Table I.

The hardness across the weldment cross-section (reference Figure 15) was determined using microhardness testing with a Knoop (HK) indenter and 300-gram load. The hardness readings were obtained in general accordance with ASTM standard E384-99є1. A series of microhardness readings were taken across the weldment at predetermined increments beginning at the fusion line with the reinforcement fillet weld and progressing through the HAZ into the pipe base metal. The hardness of the reinforcement fillet weld deposit was also determined.

Fracture of the pipe/flange weldment was due to fatigue crack progression, which initiated at the root of the weld due to a severe stress raiser effect by incomplete root pass weld penetration and fusion to the pipe and flange. These weld flaws resulted in a lowering of the weldment load-bearing capacity. Fatigue cracks initiated along the weld root and lack of fusion interfaces where the weldment cross-section was reduced.

No unusual conditions were noted in the pipe or flange base steel compositions or microstructures. No over softening or embrittlement was found associated with the weld and pipe HAZ.

Figure 1: A photograph of the flange and pipe sections in the as-received condition. The weldment was a circumferential single bevel groove weld with a reinforcing fillet weld. (Photo PA8006) 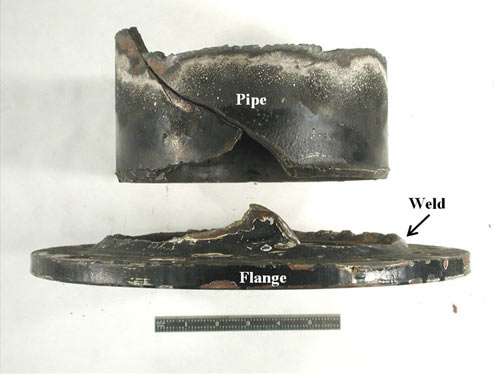 Figure 2: A side view of the flange and pipe in the as-received condition. Fracture occurred along the circumferential fillet weld. (Photo PA8007) 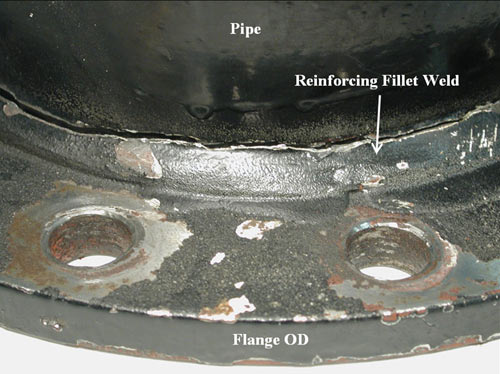 Figure 3: Close-up view of the reassembled fracture. The fracture on the OD is mainly along the toe of the filler weld on the pipe side. A smooth uniform reinforcing fillet weld is observed along the OD. (Photo PA8034) Figure 4: A photograph of the fracture surface on the pipe side. Areas exhibiting a lack of penetration of the root pass (blue) and lack of fusion to the pipe (green) and flange (red) are indicated. (Photo PA8009) 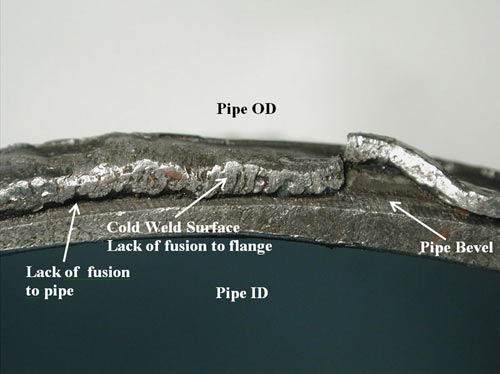 Figure 5: A close-up photograph of the fracture on the pipe end exhibiting a lack of penetration to the root of the weld and a lack of fusion to the flange and pipe (cold weld). (Photo PA8033)

Figure 6: A closer view of the fracture surface on the flange side. Thumbnail-shaped fatigue progression zones are noted along the weld root (ID). (Photo PA8023)

Figure 7: A closer view of one of the thumbnail-shaped fatigue zones along the weld root in the fracture surface on the flange side. Multiple ratchet marks (fine radial features) are visible indicating multiple fatigue initiation sites. (Photo PA8024) 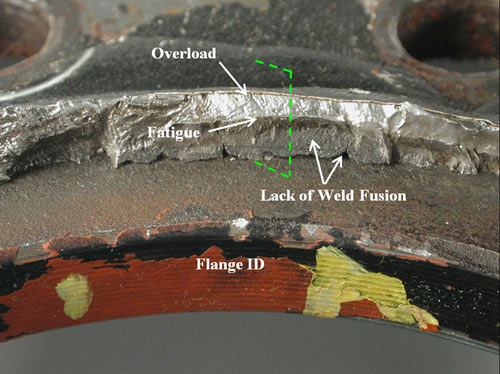 Figure 8: A closer view of a typical lack of weld fusion site along the weld fracture. A fatigue fracture initiated in the reinforcing weld above the lack of fusion site. The green dash lines illustrate the location of a cross-section taken through the weld for subsequent metallographic examination. (Photo PA8025) 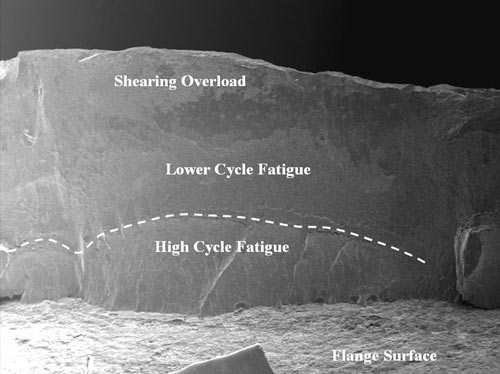 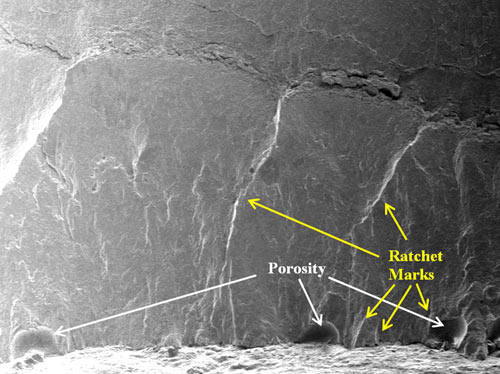 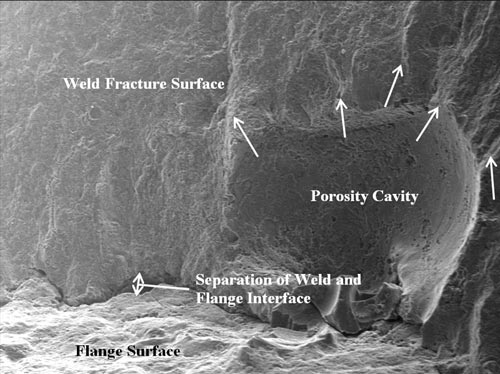 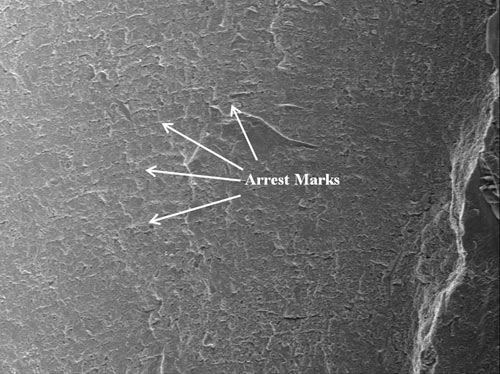 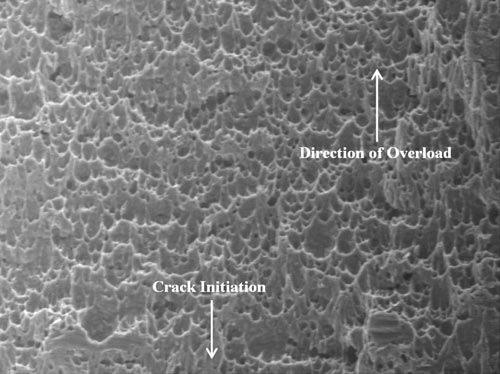 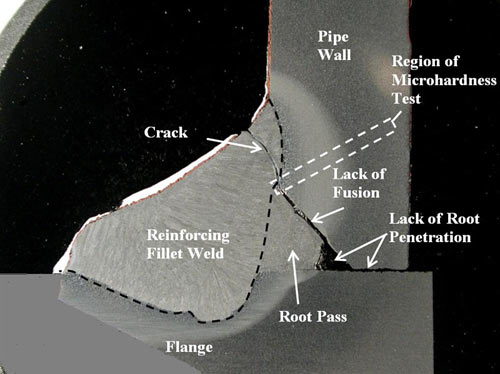 Figure 15:A photograph of the mounted, polished, and etched weldment cross-section at a site exhibiting a lack of root pass penetration and fusion. The black dash line outlines the reinforcing fillet weld. The white dash box encloses the approximate location of subsequent microhardness testing. Several areas are displayed at increased magnification in subsequent figures. (Photo PA8064)

Figure 18: A higher magnification photomicrograph of the indicated boxed area in Figure 16. The fatigue crack (arrow) has propagated from the non-fused weld/pipe interface, into the reinforcing fillet weld. The boxed area is further magnified in Figure 19. (Photo C8183, Mag: 50X)

Figure 19: A higher magnification photomicrograph of the fatigue crack initiation site at the end of the lack of fusion interface. Normal weld and HAZ microstructures are observed. (Photo C8189, Mag: 200X) 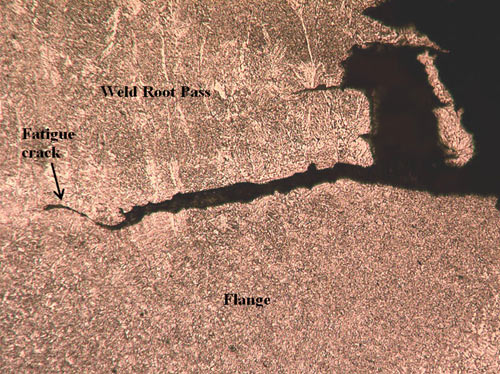 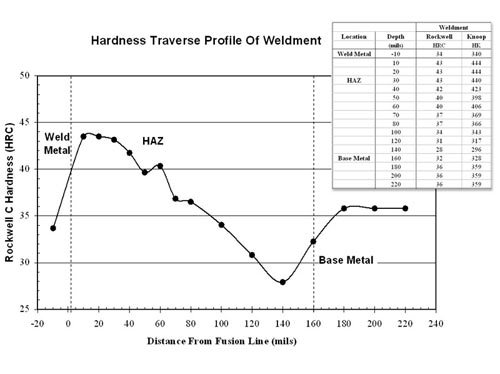 Figure 21: Plot of microhardness testing across the weld into the pipe HAZ and base metal. No unusual softening or embrittlement is indicated.