Metallurgical Technologies, Inc. examined a failed superheater tube from XXXXXX X XXX Boiler #7. The ASME SA-213 Grade T11 tube had been in service for 6 to 8 years until failure. The mode of failure was short-term stress rupture due to significant overheating. The microstructure and oxide scale thickness indicated higher than design operating temperatures. The tube had experienced multiple overheating events. At least one of these events had resulted in tube metal temperatures exceeding 1350°F. The internal surfaces had a thick, exfoliated scale that was primarily the result of repeated overheating events. The scale was also a minor contributor to the overheating.

The failed superheater tube sample is shown as received in Figure 1. The hot side had a 1-inch longitudinal rupture. Wuestite (FeO), which is dark silver-grey form of iron oxide, was visually evident 6 inches on either side of the rupture on the OD surface. The OD scale was partially exfoliated.

Loose sheets of scale were present inside the tube (Figure 5). The thickness of the loose scale was measured. The majority of the thick pieces measured 0.030 inch. The thickest piece measured 0.035 inch. The internal surface of the tube had a thick, partially exfoliated oxide scale (Figure 6).

A specimen was cut from the superheater tube and analyzed for its chemical composition using an optical emission spectrometer in accordance with ASTM E415. The results are presented in Table 1 where it may be seen that the composition met the chemical requirements for SA-213, Grade T11 tubing.

A transverse ring section was cut from the superheater tube at the rupture site. The internal and external scale/deposits were removed by glass bead blasting, and the ring dimensions were measured. The results are presented in Table 2. The original tube dimensions were not reported. Assuming that no swelling had occurred 90° away from the rupture, the OD had swelled by roughly 15% at the rupture. The rupture was also thin-lipped. The minimum measured wall thickness on the ring section was 0.023 inch at the rupture. The thickest portion measured 0.162 inch, 90° away.

The metallographic cross-section through the middle of the rupture is shown in Figures 7 and 8. The rupture edges were relatively thin. Grain elongation and ductile voids were evident in the microstructure adjacent to the rupture.

The microstructure of the superheater tube was examined at the rupture and at the tube section end containing OD cracks. The observed microstructures were similar. The microstructure along the tube OD was mostly decarburized ferrite to a depth of one half the thickness of the tube wall. The carbon content increased progressing toward the tube ID.

The carbides present near the ID were of two types. One type of carbide was heavily spheroidized and agglomerated along grain boundaries. The other type of carbide was present in fine-structured colonies. This duality of carbide types indicates that the tube had been subjected to temperatures exceeding the lower critical transformation temperatures (roughly 1350°F). This structure was observed around the circumference of the tube at both locations. Representative photomicrographs are shown in Figures 9 and 10.

The OD surface at one superheater tube end had small longitudinal cracks. The metallographic cross- section through this area is shown in Figures 11 and 12. The cracks observed on the external surface were cracks in the oxide scale. The cracks were observed to extend into the tube metal in the cross-section. Intergranular oxidation was observed around the cracks. This further indicated high temperature and oxidation damage.

The thickest observed ID oxide layer was observed 90° from the rupture. Much of the oxide had spalled in service and during cross-sectioning in the laboratory. The metallographic cross-section is shown unetched in Figure 13 and etched in Figure 14. Metallic iron was observed along the grain boundaries of the oxide. Etching dissolved the grain boundary iron. Multiple layers of equiaxed and columnar grains in the oxide indicated multiple events of rapid oxidation. Multiple oxide phases were evident. These observations are indicative of multiple events of high-temperature oxidation.

The internal scale was analyzed for its chemical compositions using energy dispersive X-ray spectroscopy (EDS) in accordance with ASTM E1508. The deposits were black and silvery-black in color and highly ferromagnetic. The inner and outer surfaces were analyzed, and the EDS spectra are shown in Figures 15 and 16.

Chemical Composition of Tube (in wt. %)

Figure 1: The hot side (top) and cold side (bottom) of the superheater tube is shown as received. The hot side had a longitudinal rupture. The iron oxide, wuestite, was evident 6 inches on either side of the rupture. The OD scale was partially exfoliated. Figure 2: The rupture was relatively thin-lipped and the tube had visibly bulged at the rupture. Note the exfoliated oxide scale.

Figure 3: Multiple, wide, longitudinal cracks were in the vicinity of the rupture.

Figure 4: The longitudinal cracks extended to one of the cut ends of the tube. This indicates that all of the damaged section may not have been removed from the boiler.

Figure 5: Loose, exfoliated scale was present inside the tube.

Figure 6: The internal surface of the tube had a thick, partially exfoliated oxide scale. 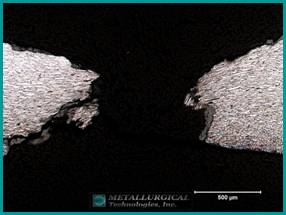 Figure 7: The metallographic cross section through the middle of the rupture is shown. The grains were elongated and the fracture edges were relatively thin. (Nital etch, Mag: 50X) 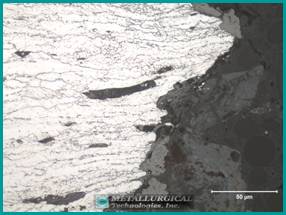 Figure 8: A close-up of the previous figure is shown. Grain elongation and ductile voids were evident in the microstructure adjacent to the rupture. (Nital etch, Mag: 500X) 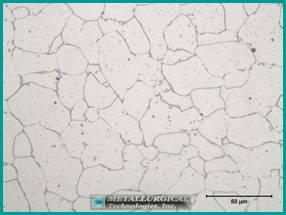 Figure 9: The microstructures near the OD surface were mostly decarburized. The remaining carbides were highly spheroidized and agglomerated along the ferrite grain boundaries. The microstructure 90° from the rupture and at the tube end is shown.(Nital etch, Mag. 500X) Figure 10: The microstructures near the ID surface consisted of partially and highly spheroidized and agglomerated carbides along the ferrite grain boundaries. The microstructure 90° from the rupture and at the tube end is shown. (Nital etch, Mag. 500X) 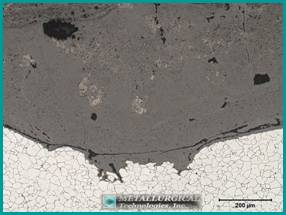 Figure 11: The metallographic cross-section through the small longitudinal cracks on the OD surface at the tube end. (Nital etch, Mag. 100X) 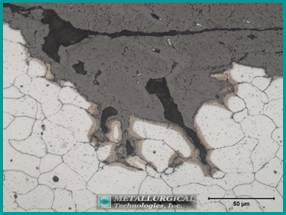 Figure 12: The area above is shown at higher magnification. Oxidation and cracking are proceeding along the tube’s grain boundaries. (Nital etch, Mag. 500X) 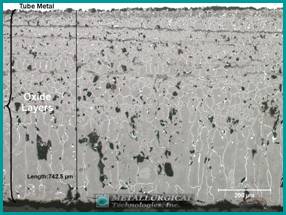 Figure 13: The thickest observed ID oxide layer was observed 90° from the rupture. The metallographic cross-section is shown unetched, and metallic iron was observed along the grain boundaries of the oxide (thin white). Multiple oxide phases and multiple layers of equiaxed and columnar grains were evident. (unetched, Mag. 100X) 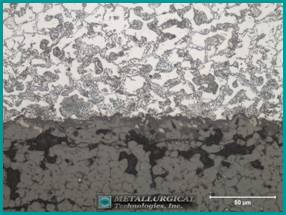 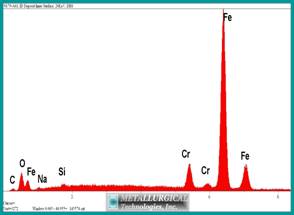 Figure 15: The EDS spectrum for the inner layer of the ID scale is shown. The deposit is mainly iron oxide with some chromium oxide and a trace of silicon. Sodium was detected within the scale, but not phosphorous. (Spectrum-A01, 20keV) 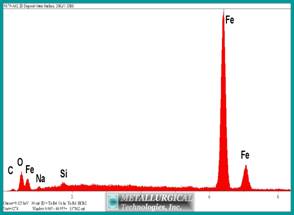 Figure 16: The EDS spectrum of the outer layer of the ID scale is shown. Sodium was still present, but chromium was absent in the outer layer. (Spectrum -A02, 20keV)